About A Step Above Pet Nutrition and Training

About the A Step Above Pet Nutrition and Training Team

We offer a large range of training services all customized for your family conducted in and around your home including puppy training, basic obedience, and socialization.  More in-depth training needs such as continued education, behavioral modification, reactivity issues and more are also offered.

I, Rachel, have worked in pet nutrition for over 14 years. It has been a dream of mine for over a decade to own my own store to help educate and provide a personalized experience for each and every family. I have run several other pet-related family-owned businesses throughout the metro Atlanta area as well as worked for a natural pet food manufacturer. My goal is to help people by giving them guidance to care for their animals in the most natural way possible allowing them to work through any potential issues with diet and nutritional supplementation when needed. I am certified pet nutrition specialist and am currently working on finishing my raw pet nutrition certification. Once complete, I will be able to assist those making a home prepared raw diet to ensure the diet is complete and balanced.

This is Bootie, he became a part of my family when he was just a kitten, I was only 9. He came with me when I moved out and was by my side for a very big part of my life. When he was 15, he was diagnosed with kidney failure and I was devastated having not dealt with anything like that before. I had only worked in the industry for a few years at that point and that's when I dove deep into the world of healing an animal with a natural approach. Cats by nature are obligate carnivores and thrive eating a meat-based diet. I quickly learned that he needed clean, easily digestible protein to support his kidneys. I put him on a combination diet consisting of wet food and raw. I worked with a phenomenal integrative vet to monitor his progress closely. Within 6 months his kidney levels stabilized and he continued to live a long, normal life. My baby boy was just over 21 when it was time for us to say goodbye. What I learned from him during those years has gone on to help so many more cats in similar situations. 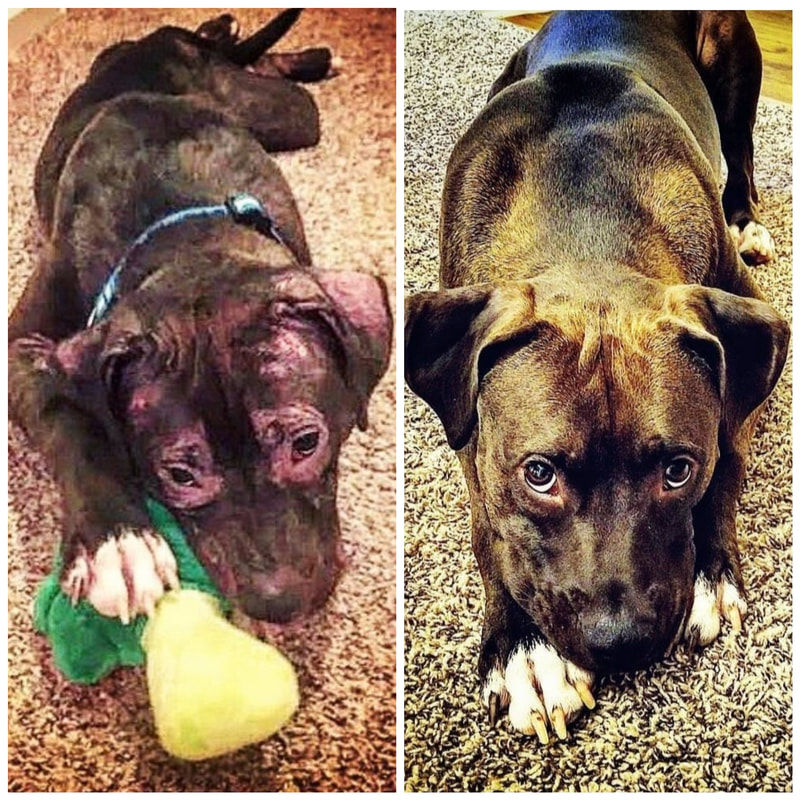 This big boy is Marshall. He was the first of many that Brian and I worked on together. Brian got a call from one of the rescues we work with asking if he could board him and work on training and socialization with him. He was adopted out as a puppy and was horribly neglected by the family who adopted him. They left him in his crate all the time and would go days without giving him food or water or even taking him out for potty breaks. Needless to say he was in really rough shape when the rescue took him back from that family. He had a terrible case of demodectic mange contributing to massive amounts of hair loss, terrible ear infections and was significantly underweight. I took one look at him and knew I wanted to foster him to give him the best food and supplements possible to get him healthy again. Within 6 weeks his hair was growing in nicely, he was putting weight on, and was learning all about basic obedience and socialization with people as well as dogs. It wasn't long before Marshall became my first foster fail and joined the family. He is a gentle giant and has taught so many of the fosters we have had to be the best dogs they can be. He is without a doubt a momma's boy! 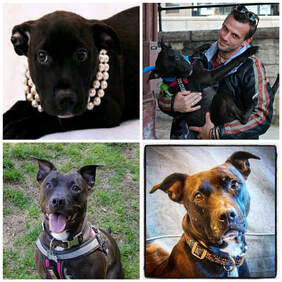 This is Malu Lani, she is Brian's PTSD service dog. Brian was trained as an emergency combat medic in the Air Force and began to look into getting a PTSD dog to help him through during a particularly difficult time in his life. He quickly discovered that getting a pre-trained dog was not only very expensive but there were extremely long wait times. This is where his dog training journey began. He saw this picture of a pitiful little black puppy with oversized pearls and sent his sister off to get rescue her. She arrived the next morning when the shelter opened only to be told the puppy had been put down the previous week. After walking through the kennels it was discovered that her paperwork had fallen between the filing cabinets and she was passed over. Malu Lani, which means "protected by the heavens" in Hawaiian was meant to be a part of Brian's life.

After researching and finding out what truly was required to certify a PTSD service dog, and going through several training courses of his own to certify as a trainer, Brian discovered that training was truly the best therapy in the world for him and in the process of him recovering, he was able to help others as well. He started as a trainer with Petco Unleashed down in Smyrna and soon advanced through the ranks to become supervisor of the Unleashed training program. It was at this point that Brian decided to challenge himself and step out of his comfort zone and he started the concept of A Step Above which back then was a one-man operation known as Brian the Dog Guy. Brian worked to train several different scenarios and needs throughout the Atlanta area over the next two years while still working at Petco until he finally branched out on his own and made things official with his training business. During that time, he studied under several other trainers and behaviorists to learn the nuances of not only basic and advanced training but also, behavior modification for dogs who were suffering from abuse, leash reactivity, fear-based aggression and aggression both towards people and other dogs. He tested and certified as a CBATI Behaviorist and continues to use his skills and resources to help canines and their owners in the greater Atlanta area.

Brian and I have a small zoo of our own including cats, dogs and an assortment of other little creatures. We have had many fosters in our care as well as several wildlife rescues that we have rehabilitated over the last few years. 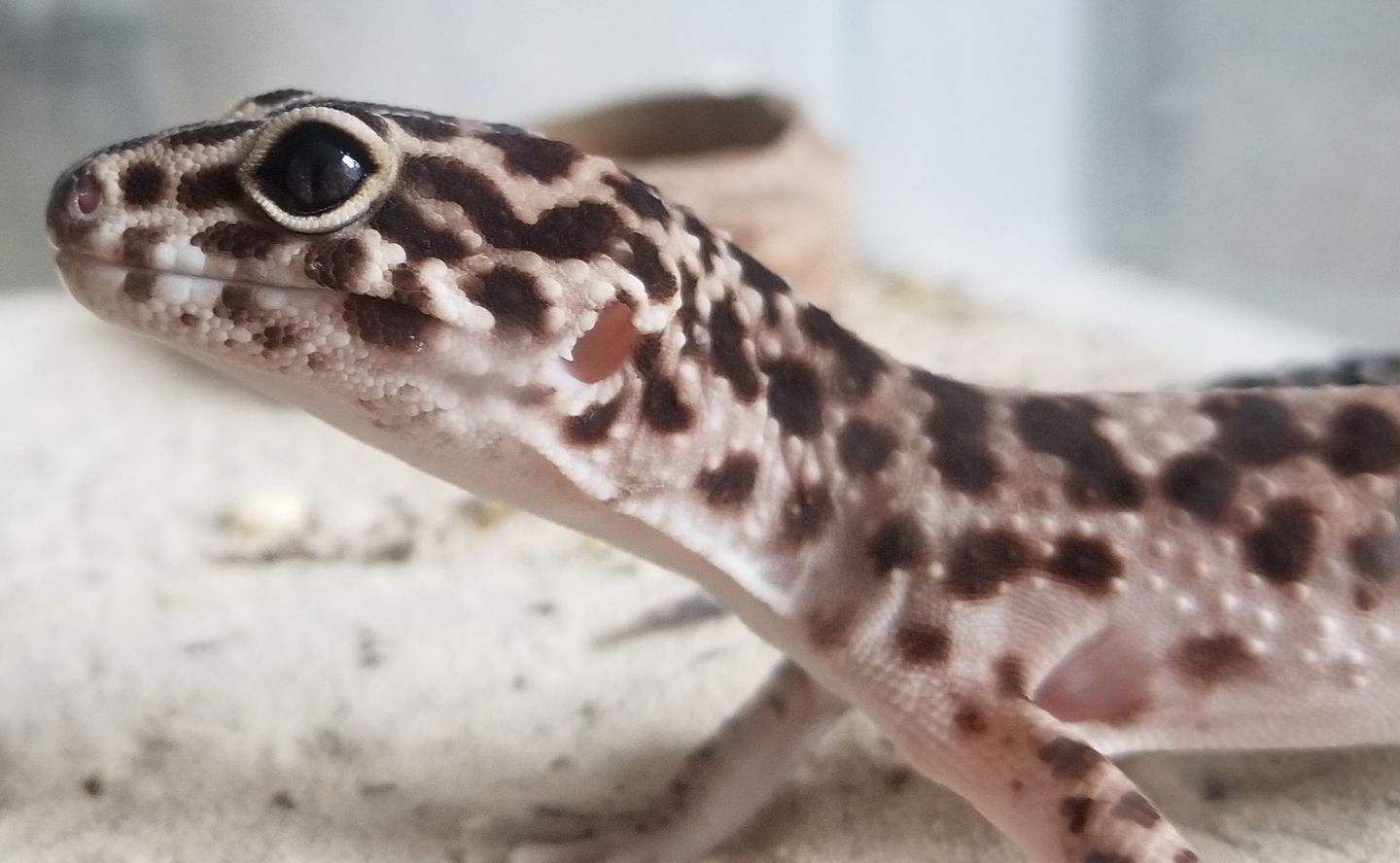 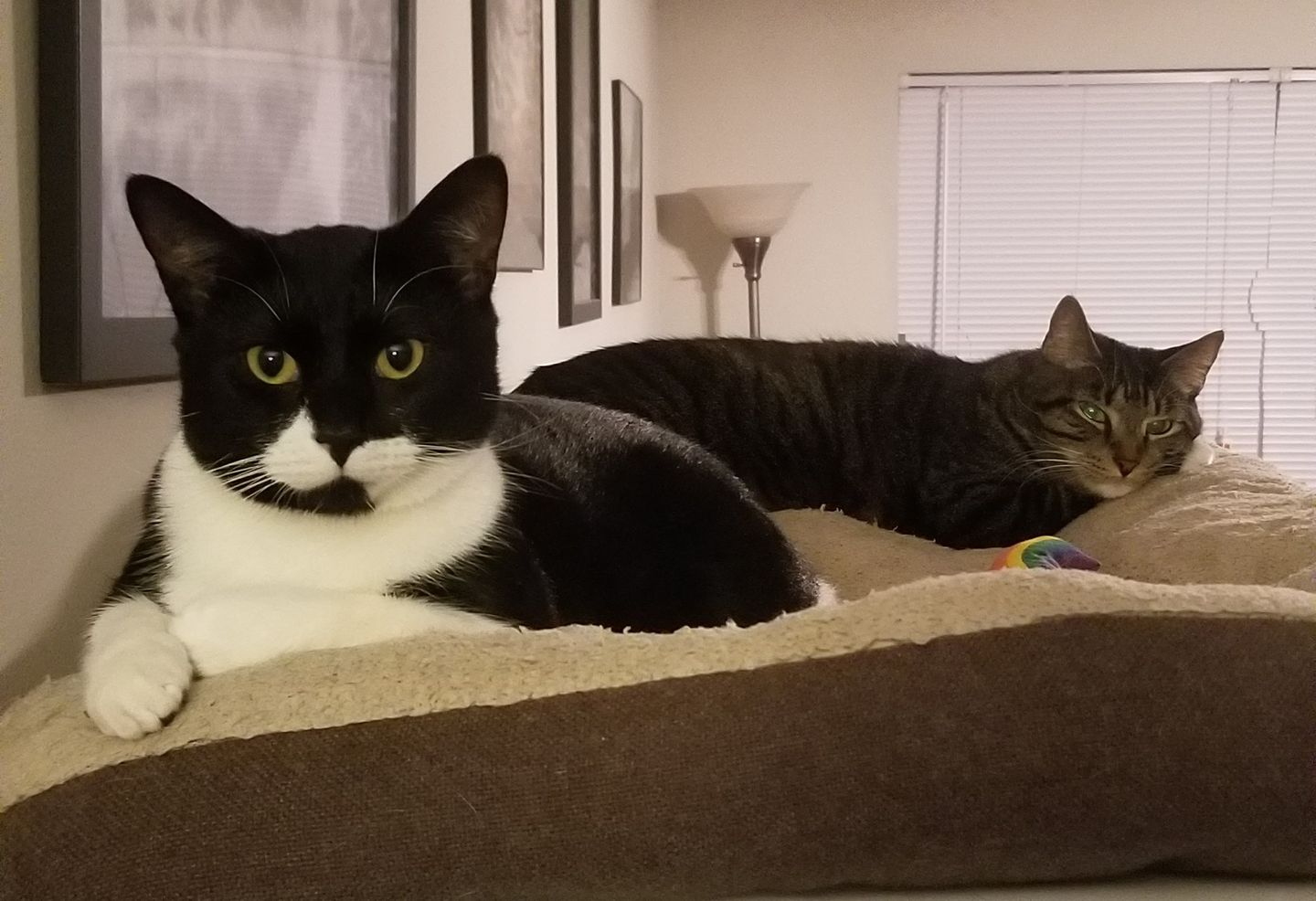 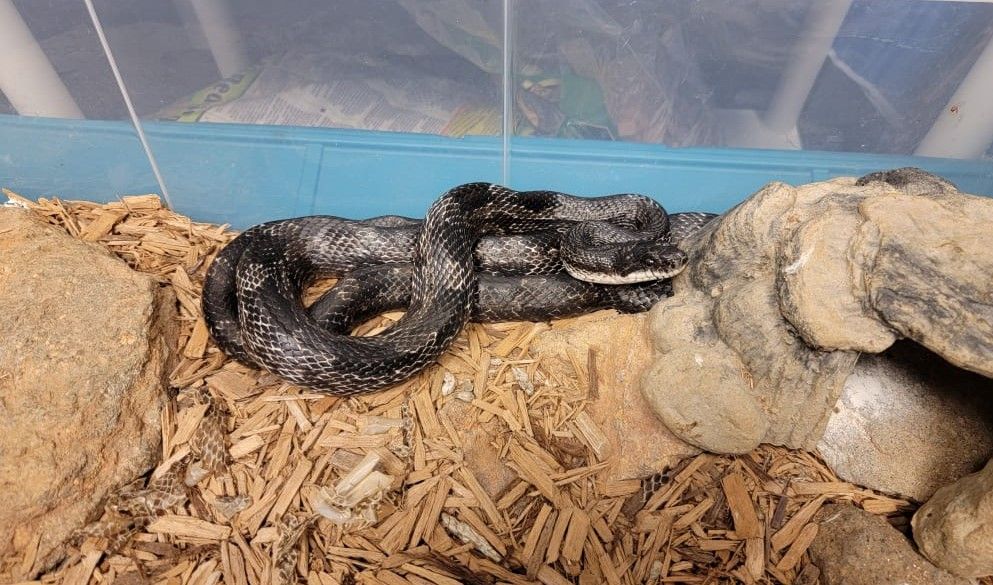 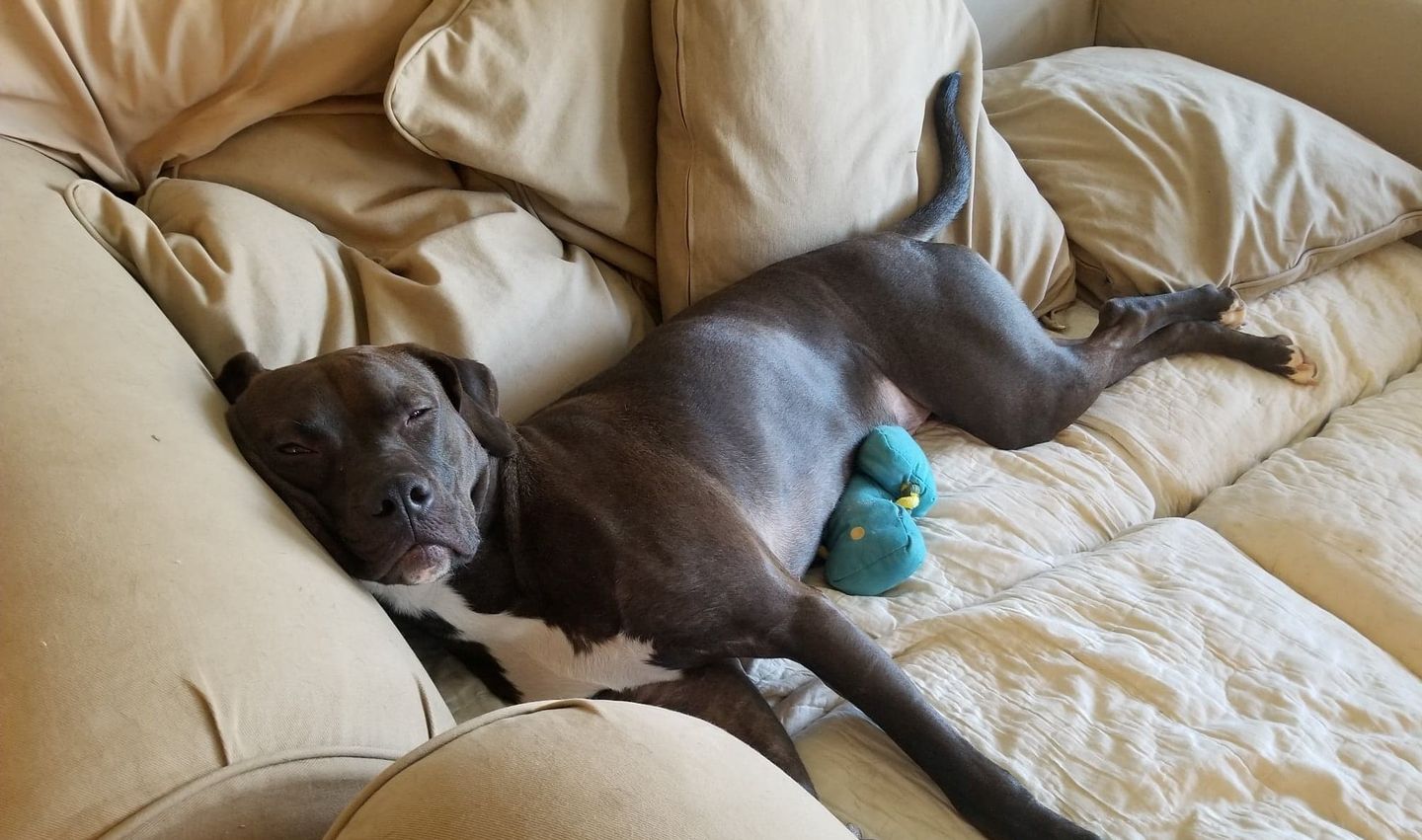 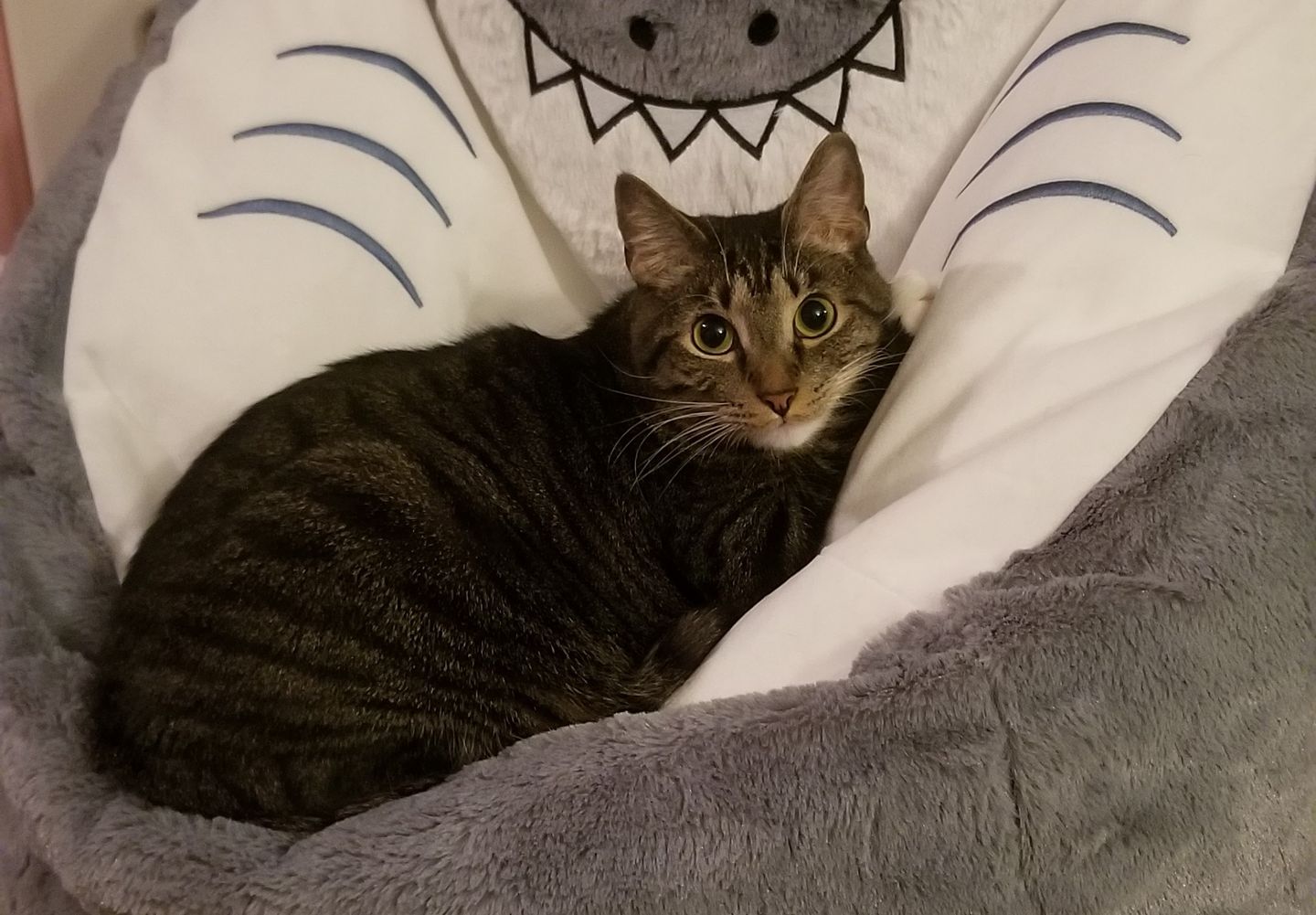 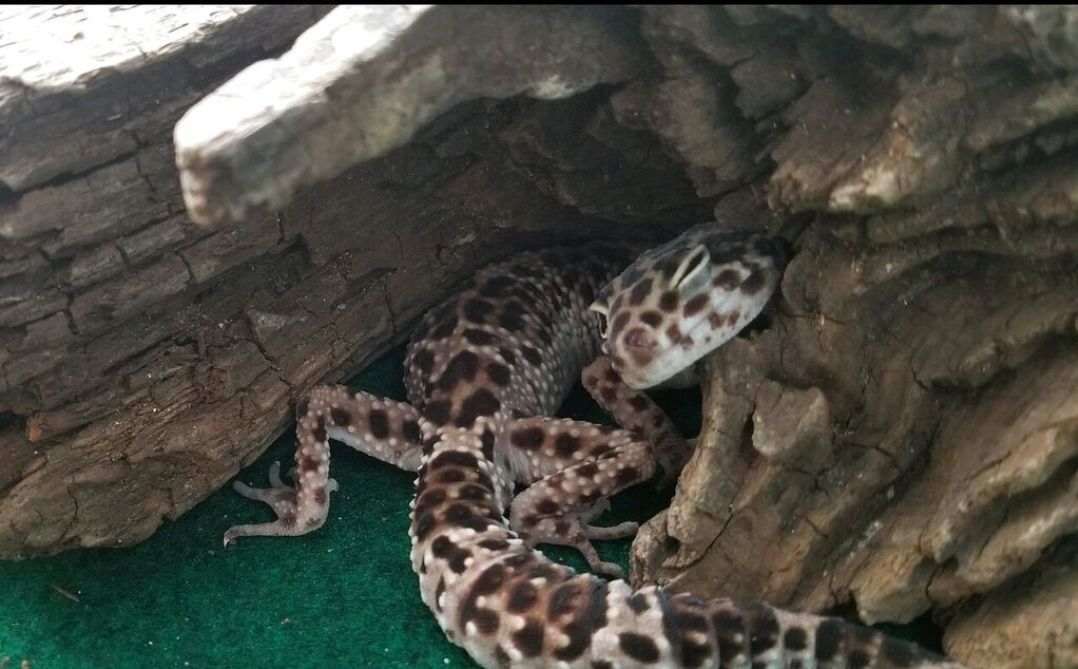 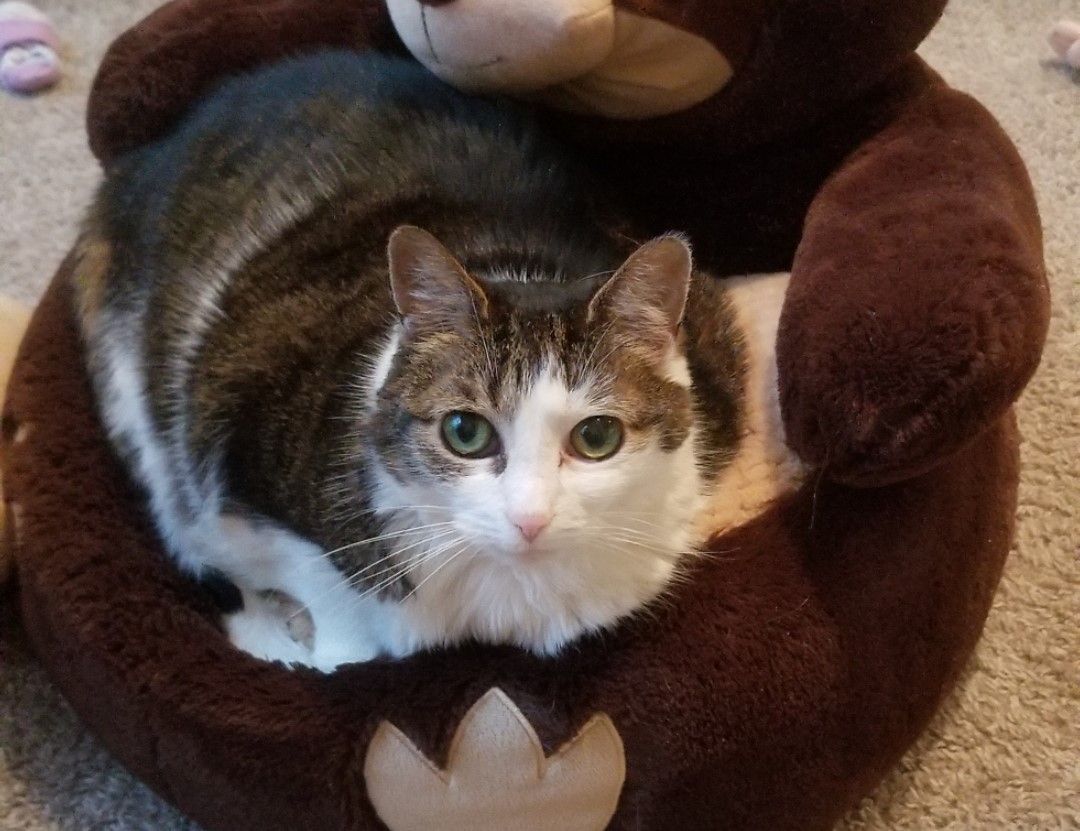 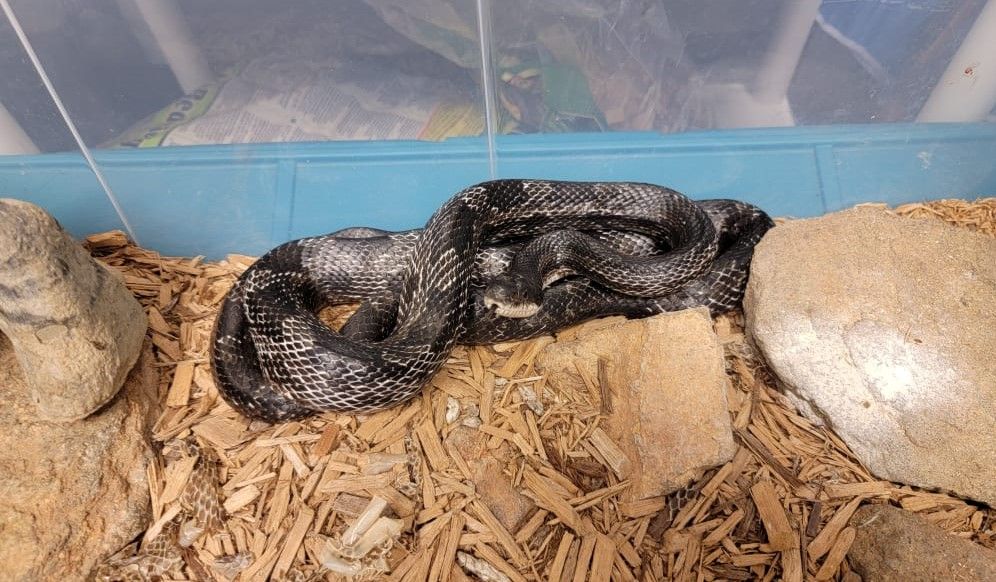 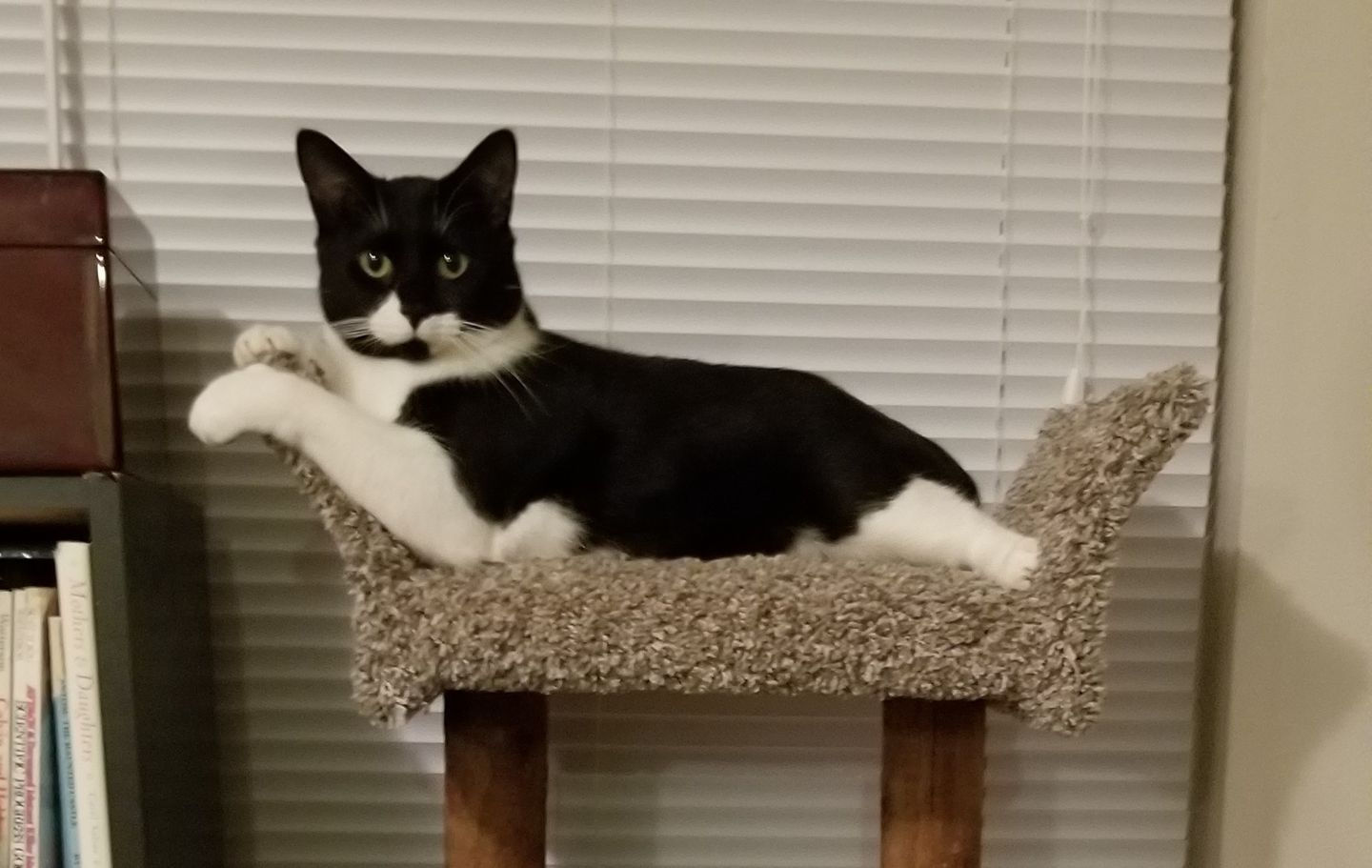 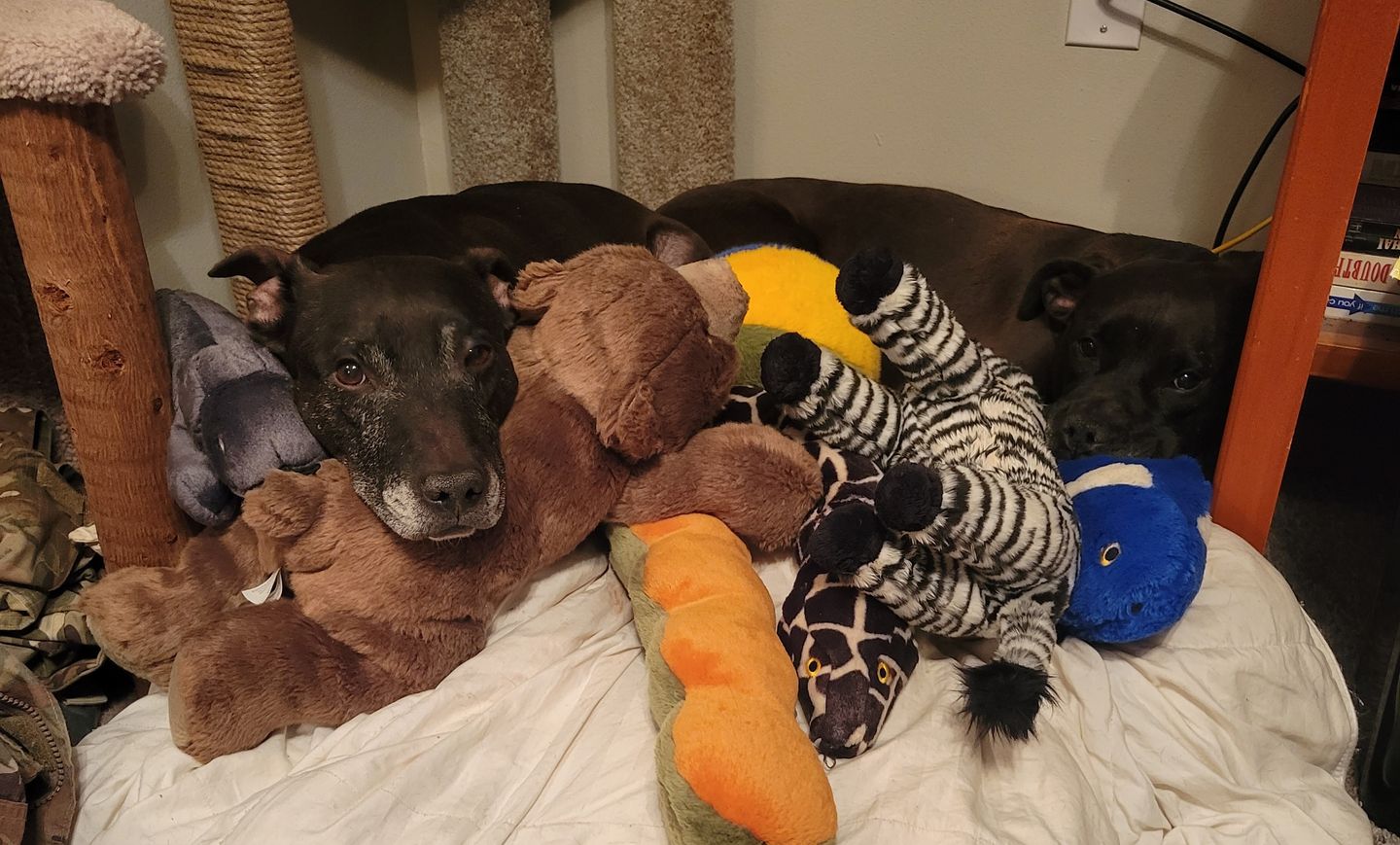 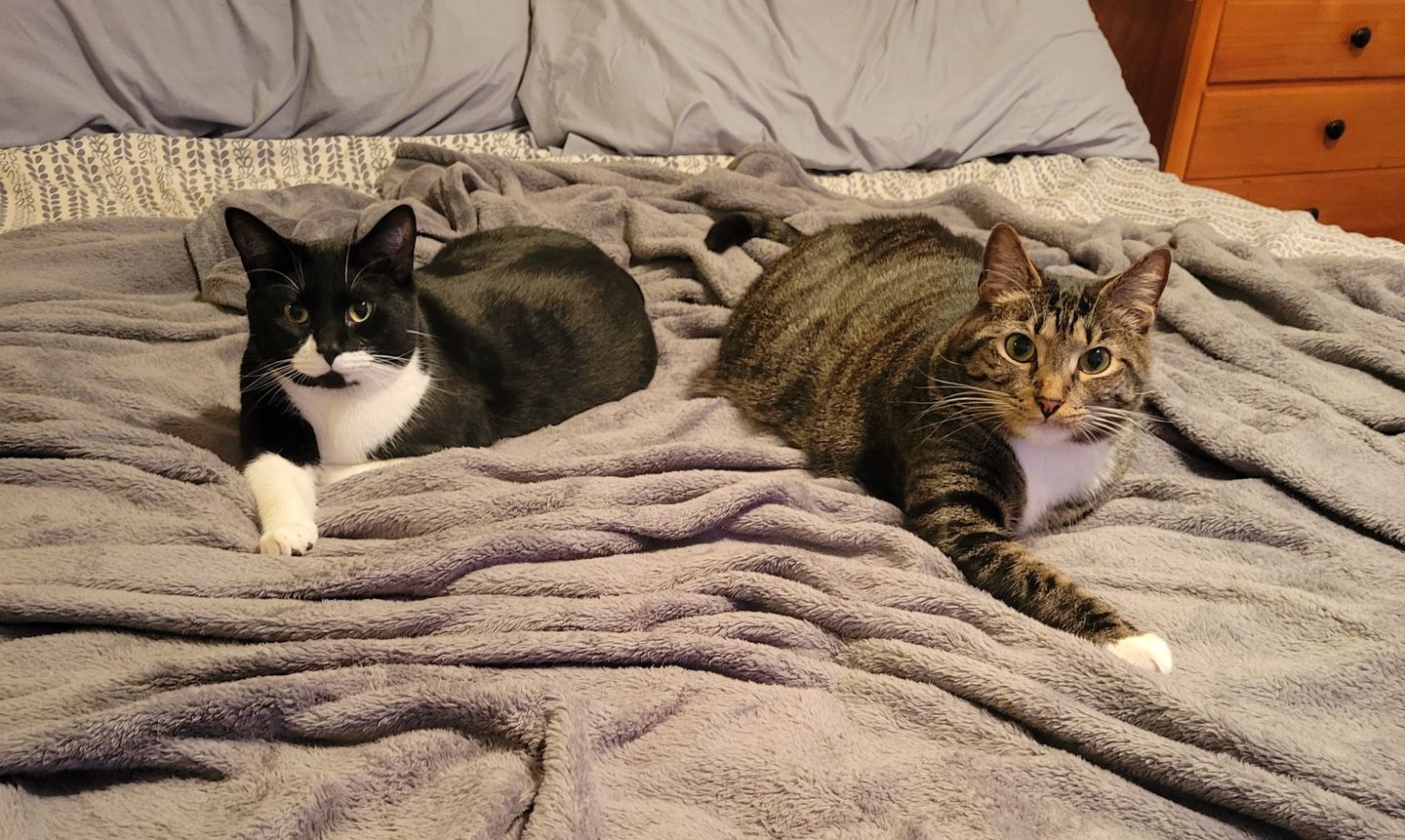 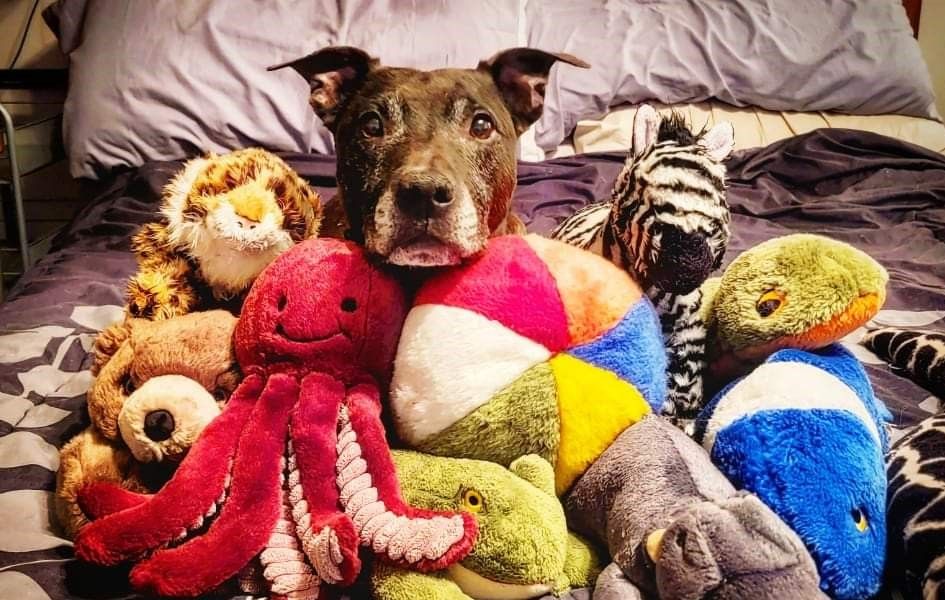 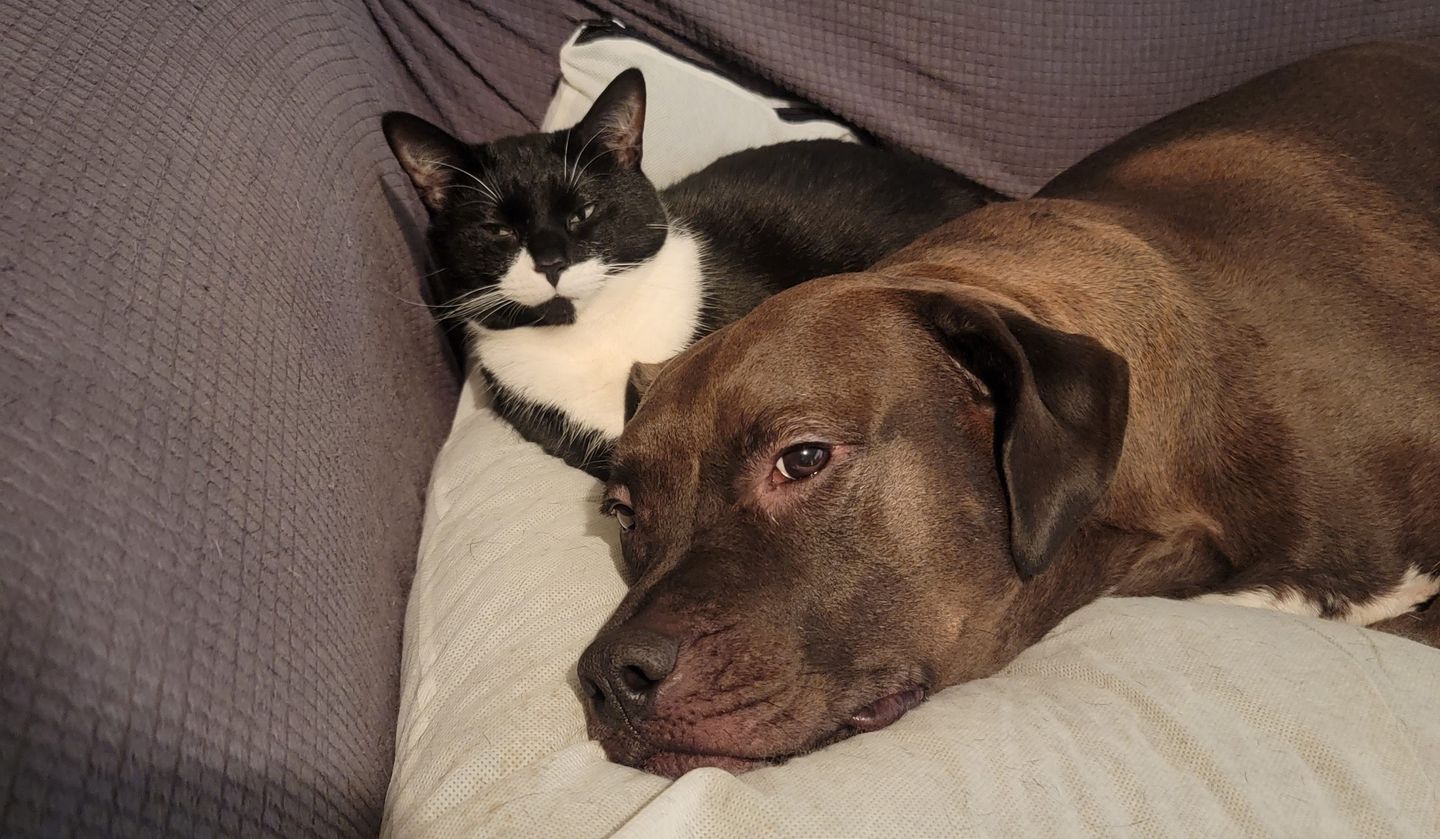 WHAT Canton CUSTOMERS ARE SAYING

Rachel and Brian are amazing! I randomly stopped in one day to find a chicken free/actually healthy food for my dog and they’ve helped me with much more than that! Brian helped me introduce my reactive dog to not one, but TWO new dogs!! Pebbles is now eating better food and is doing so great with training because of A Step Above. Check them out!!

Found this store online as we were looking for someone who sells Answers dog food. We were so happy with the guidance we received from Rachel regarding food choices for our new puppy. Her attitude and customer service are on point!!!! Thanks again for everything!

Super nice & helpful people. Had all the hard to find stuff. I had several friends shop here and im glad I did. Support your local business 🇺🇸🇺🇸🇺🇸

Super friendly and knowledgeable owners. They are very knowledgeable about different pet nutrition needs and helped me solve a problem with one of my dogs who was having digestive issues. They are always extremely helpful and friendly. Pricing is competitive for top quality products. A special Bonus is getting to support a local neighborhood small business! Keep up the good work!

View All Reviews Write A Review
Come visit our pet supply store in Canton, GA specializing in quality food, treats, and supplies for cats and dogs.